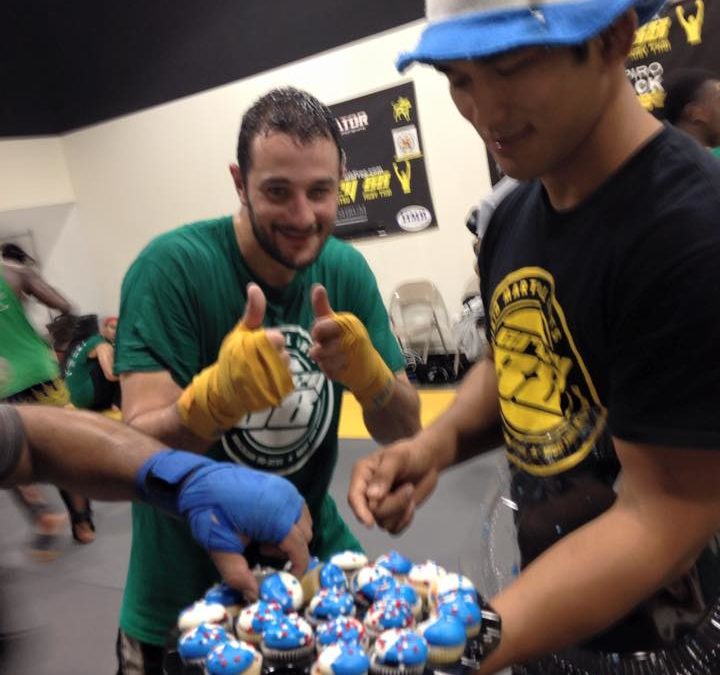 A few years after graduating my girlfriend started looking for gyms to get back in shape. She was aware I had a martial arts background while growing up and though it was a good idea to try some herself. She searched online for gyms nearby and found out about a Muay Thai / Brazilian Jiu Jitsu gym called Crazy 88. She was happy that the gym offered a one month free trial, no questions asked, so she had no reason to hesitate. After she was done with her first class she called me and was excited to tell me all she learned and how welcomed she felt. I was very surprised to hear that after the first week she was already moving up from trial to full time.

We were on a long distance relationship. I had the chance to visit her one weekend and the first thing she wanted to do was take me to the gym. At first I hesitated because I had been looking for places to practice martial arts for years but never had any luck. In the past I visited many gyms that had rooms full of students with advanced belts, but they punched and kicked like beginners. I even saw gyms that didn’t believe in competing or in-class light sparring. It then occurred to me that Martial Arts in the United States was mainly a business, which is why it was hard to find a martial arts gym that was truly dedicated to the art. My girlfriend and I both are involved in martial arts.

As I walked in to the gym I was a little nervous to see some big guys who looked very experienced and at that point I was concerned about being judged by others. As I walked in to the gym, there was a wall with multiple belts and medals on display, proving that this gym was very good in competition. I was immediately welcomed by one of the coaches. He showed me the schedule of classes and levels they teach. He gave me a tour of the facilities and walked me through the easy process of signing up for a one month free, no questions asked program.

With my martial arts background, I was impressed with how much I learned during my first class. The people I trained with were very down to earth (unlike most of the meathead gyms I visited). It was clear that the coaches at this gym were very knowledgeable and experienced. When I got home I did some research on my coaches and discovered many of them had professional records. This school had fighters at the sparring level, amateur level fighters competing nationally, and professional level fighters competing in the UFC and overseas (OneFC). I couldn’t wait to go back to the gym. Then it happened; I finally found a job in the area and moved in with my girlfriend. I was so excited to go to the gym that after the first day on my new job – I ran home to get ready to go to the gym. During the whole week I took the Brazilian Jiu Jitsu, Boxing and Muay Thai classes. I couldn’t have been happier. In my first 2 weeks everything hurt, but I was so happy to be part of the gym that I didn’t let the pain bother me.

I started noticing that every coach was also a student who spent the time they didn’t teach to learn other techniques in other classes. For example, the Boxing coach and the Muay Thai coach both participated as students in the BJJ classes so they could become more well-rounded. It was a very good feeling knowing that all the coaches were so open minded to each other’s teachings and at the same time they were down to earth and more than happy to teach. They really set a good example for the students by showing that to be a real fighter, you need to learn all tricks of the trade while still having a sense of humility.

I started to train hard and I really can’t pinpoint what I was enjoying most. I am the type of person who dislikes normal gyms. Going to the gym to only lift weights and run on a treadmill is not for me. After a month I noticed my body changing. My gut started to flatten out and my arms started to get back in shape. My cardio improved dramatically. I was so happy that I felt and looked good and that I was getting back in shape. In a short time I earned my Level 1 rank in Muay Thai and was asked if I wanted to do my first exhibition fight. I was nervous but still accepted. My coach proceeded to record my weight and asked me if I could lose weight for the fight. I trained hard for 3 months and noticed a significant weight loss of 10 lbs, only through training, no dieting.

In almost no time the day came for my teammates and me to fight against other fighters from the other MMA gyms in the area. Our coach set up the event to seem like a classic Muay Thai fight, complete with a boxing ring and the traditional Thai music. My opponent was assigned to me in less than a week before the day of the fight, which made me even more nervous because I barely had anytime to research his fighting technique. On the day of the fight, the Crazy 88 gym in Elkridge was rearranged so that spectators could come and watch.

I warmed up before the fight and tried to mentally prepare myself for what I knew was going to be a painful fight. My name was called and I walked to the ring like it was a real event. It felt real. My opponent was called into the ring after me. Once he stepped over the rope, I asked myself, why did I sign up for this? He looked very strong, had a lot of muscle definition, weighed in slightly more than me, and from what I was able to research about him, there was a long athletic history. But deep inside I knew I had better training than he did.

The match started and when I began testing him out, the confidence on my skills came out. In a matter of seconds, I was no longer feeling scared. I was excited! I started to fight and all of my training took over like second nature. I started to block, counter, and make hard contact. I sensed that my technique was not that perfect because I was relatively new to Muay Thai, but I was able to react and adjust to the fight. When he got within close contact, I started clinching, just like we had practiced two days earlier, and I started shooting my knee into his abs. Of all my previous martial arts experience, clinching is the newest technique I have learned so far. I felt that my clinching was very effective and he was having a difficult time blocking it. After the first round ended I noticed how tired he was from all the body shots he took from me. At that point I knew what to do. I could feel myself getting tired but I knew that in terms of fighting, I was in better shape than him. All of a sudden, Round 3 was over and all I could see all of my teammates (and my girlfriend, who is also my teammate) smiling at me. I knew I had done well and was very relieved to see this. After walking out of the ring, I made sure to stay nearby to watch all of my teammates’ fights. They all did really well. I was so proud of what we’ve accomplished together. It was a very rewarding experience.

I don’t see this gym as a business. This gym is hungry to make good fighters and have people with good character. I am proud to say I train at the Crazy 88 and can’t wait to improve my skills. The Owings Mills crew at the Smoker Fights