The End of The Crossfit Debate Why do I say not really? Most people would argue that Crossfit is not good because of the high rate of injury, or the fact that the requirements to become Crossfit certified are minimal (all that is required to become certified through Crossfit is $1000 and a two-day training course). While this does lead to many Crossfit gyms having low professionalism and risky training methodology, many Crossfit trainers also hold legitimate strength and conditioning certifications as well as college educations in the field.  There are legitimate Crossfit trainers out there.

The reason Crossfit is not good for MMA is because their specialty is not specializing. I’ll explain by putting Crossfit into the proper context.

The aim of CrossFit is to forge a broad, general and inclusive fitness. We have sought to build a program that will best prepare trainees for any physical contingency — not only for the unknown, but for the unknowable. After looking at all sport and physical tasks collectively, we asked what physical skills and adaptations would most universally lend themselves to performance advantage. Capacity culled from the intersection of all sports demands would quite logically lend itself well to all sport. In sum, our specialty is not specializing.

So my takeaway is that Crossfit is a training methodology engineered for the likes of firemen, police officers, and soldiers. These are all people who need to be ready mentally and physically to take on unique situations every single day. When they go to work, they have literally no idea what they might have to do. A fireman might have to climb to the top of burning building to save a baby. A police officer may have to chase a man through streets, trash cans, people, cars, all while this guy might be shooting at them.  Or maybe they have to move a bunch of heavy equipment on and off a vehicle.  The physical demands are completely unpredictable. 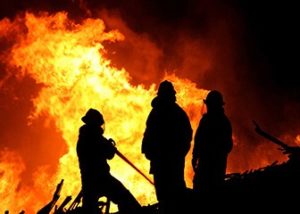 Not the same as an MMA fight?

This is where Crossfit comes in to play. Crossfits training is created to prepare the athlete for any situation he may encounter. An athlete trained in Crossfit will not have any particularly excellent physical abilities, but they are adaptable to a certain degree.

This is great if you are NOT trying to excel in a particular area, but the fact is, Mixed Martial Arts, Brazilian Jiu-Jitsu, Muay Thai, Boxing and other Combat Sports are all fairly predictable.  They have a set number of rounds, with a set number of techniques, and all the matches look pretty similar.  Therefore, there is no need to be ready for anything and everything. The knowledge of how these sports work means that you can tailor you strength and conditioning to allow you to specialize in those specific sports.

For example, lets take a look at the mechanics involved in striking versus grappling.

The common theme in both sports is a lot of use of the hips. Striking uses hip movement to chain energy to the hands for punches, and for throwing lightning-fast kicks. Grappling uses explosive hip drive in any takedown, and many guard and top positions. The arm bar is a perfect example of the upper body pulling the arm as the hips extend to separate the arm from the body.

This table shows which movements are emphasized more in each sport.

Now a grappler and a striker will each do a lot of the same things. Even though each sport leans toward certain types of movements, this does not mean that the athlete does not need a balanced muscular system. The difference is that there can be sport specific exercises and programs for each athlete. This is where Crossfit falls behind.

So why have two athletes, involved two different sports, trainining the exact same way?  You don’t!

Crossfit fails to acknowledge the sport specific movements that help an athlete to become the highest echelon athlete in his/her respective sport. But that’s how Crossfit is supposed to be. Crossfit’s model is to be ready for anything, which is awesome. However, if you are ready for everything, you cannot expect to be the highest level of anything.