The highlight of this year’s tournament: Kayla Dehm won the Blue Belt IBJJF World Championships 2018 in Long Beach, California, in the Medium Heavy Weight Division. She also took Double Silver the Blue Belt Medium Heavy Division and Open Class at the IBJJF Pan Jiu-Jitsu Championship earlier this year. Dehm won a Bronze Medal at White Belt in 2015 and Bronze at Blue Belt in 2016. For her hard work, she was promoted to a Crazy 88 Purple Belt. 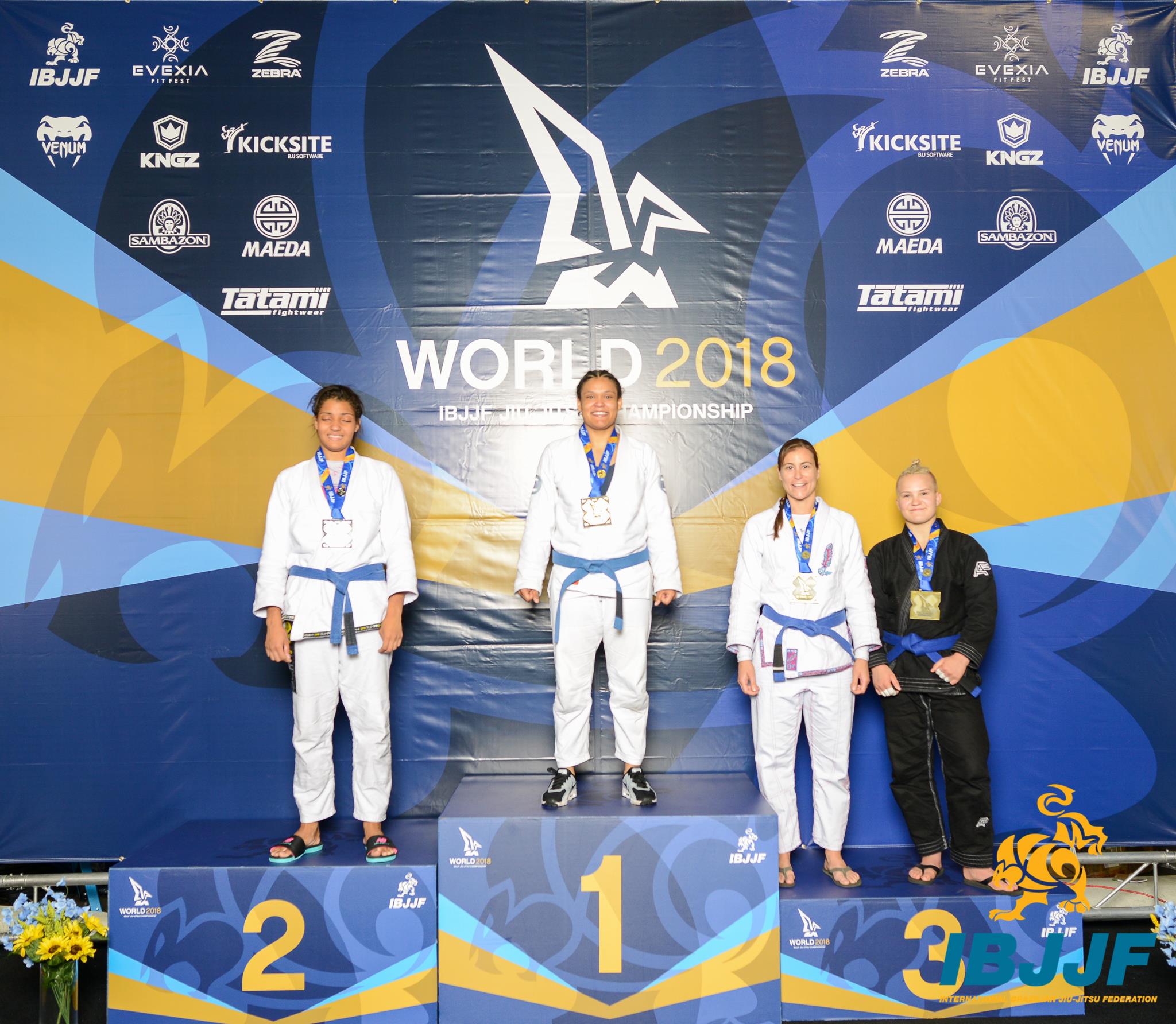 Highlights: Dehm won four matches on her road to World Champion. She beat her first opponent with a lapel choke from the back and won a judge’s decision in her second match. She submitted her opponent with a mounted cross choke in the Semi-Finals and choked her opponent unconscious with a bread cutter in the Finals. Watch Dehm’s victory ‘Cheer‘ on her Instagram page. Throughout the season, Dehm worked hard with a peak performance professional to overcome her competition anxiety that had affected her the season before. She is a substitute teacher at Baltimore Junior Academy (BJA) and is co-director for her church’s jiu-jitsu program.

“Standing on the podium to receive the 2018 International Brazilian Jiu-Jitsu Adult Female Blue Medium-Heavy World title this spring, Kayla Dehm was able to be “present in the moment and enjoy how far God had taken her,” she says—a much different place than where she was last year.”

Olivia Obodoagha pulled an upset at her first IBJJF World Championships. She brought home the Silver Medal in the Blue Belt Super Heavy Weight Division narrowly getting edged out in the Finals by judge’s decision. Obodoagha won her first match on points 4-2 and her second 8-0. She won the Semi-Finals match by judge’s decision upsetting an opponent that beat her earlier in the year by double digits, who also was the 2018 IBJJF Pan Jiu-Jitsu Champion. Check out her victory dance.

Leah Mayes competed in the Blue Belt Middle Weight Division. Mayes won her first match 2-0 with a take down. She won her second match by an advantage with an omoplata sweep in the last 10 seconds, against the returning Bronze medalist in her division. She lost 0-2 in the Quarter-Finals just missing the medal rounds. Byung Ju Lee competed in the Purple Belt Light Weight Division. He won his first match 2-0 and his second by an advantage. He lost his third by two advantages. Vannessa Griffin also competed.

Young Brian Anderson competed in the Juvenile 2 Feather Weight Division. He won his first match by judge’s decision and lost his Semi-Finals match by an advantage. He took Bronze for his division and entered the Juvenile Blue Belt Open Class. Anderson won his first match with a kimura submission. He lost the Semi-Finals match and brought home Double Bronze for his first IBJJF World Championships.