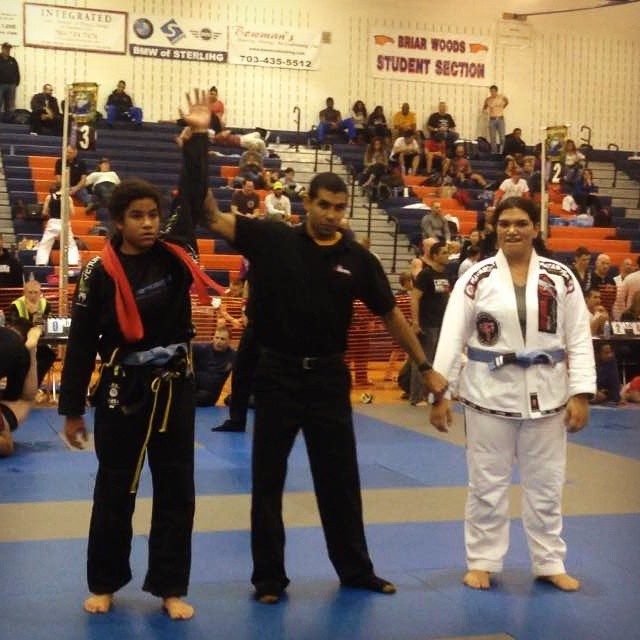 It was a horrifically rainy Saturday in Maryland when Crazy 88 headed down to Virginia to compete at the Copa Nova Jiu-Jitsu tournament.

The team we were sending to this tournament was small (but tough):

Coach Julius had returned late from Chicago after being imprisoned at O’Hare airport for five hours so John Johnson was assigned to driving. This proved to be a nail-biting harrowing experience.  Who knew that driving in a fairly straight line with little traffic could be so frightening.  The positive was that it got everyone’s nerves ready for the competition.

When we arrived, we were told that there were no medals at the venue for the competitors but that the prizes would be mailed to us -_-  The confusion continued with a rules meeting where we were told that the rules were “IBJJF with some changes” which from what I could tell, meant it wasn’t IBJJF (International Brazilian Jiu-Jitsu Federation) scoring at all.

Griffin was up first and after an awkward first match, got into her groove, and won all her matches quite dominantly. There were not many female competitors so she wrestled one girl 3x and then two other women 1x each. It has been a frustrating year for “Nancy” as IBJJF will not allow a 17-year old to participate in the Adult divisions and every single Female Juvenile division has had 0 competitors. Thankfully, she was able to compete here and also next week at another local tournament in Delaware. Willy Connelly competed both in the Advanced No Gi and the Blue Belt. He took three losses in the No Gi but bounced back in the Gi, going undefeated in both the Cruiserweight division and the Open Division (six or seven gi matches total). He displayed an open game, including Judo, Berimbolos, and of course, his patented X-pass.  Also props to Emma, who played the role of supportive girlfriend and recorded all of Willy’s matches.

John Johnson won the Super Heavyweight Blue Belt division before meeting Willy in the finals of the Open. Southside was old school all the way, using crushing heavy top pressure and half guard, to blow through the guards of his opponents.  He did forget to Long Step however . John Johnson and Will Connelly won their weight classes and closed out the Blue Belt Open division.

Mike Herlich went 1-2 for the day. He lost a wild first match in the Beginner No Gi on points. After missing his weight class division, Mike was able to switch his registration to the White Belt Open Division. He went 1-1 there. Great first tournament experience for Mike.

Overall, the tournament ended up being a positive experience.  The guys got some experience competing against some of the Virginia teams and we were able to get one rookie through his first tournament.  Next week, a few more guys will be headed to Delaware for another local competition so if you’re interested in getting some matches, please let one of the coaches know!